Last April, my boyfriend and I took a trip to Spain. It was AMAZING. When I got back I excitedly called my mom to tell her all about it. After the conversation she said, “But you’ve only told me about what you ate.” DUH. Isn’t that the only thing that matters? I’ve always been a foodie. And when I go to new locations I like to totally immerse myself in their food culture. Today I’m going to take you on a whirlwind tour, detailing how I ate myself through Spain.

When we arrived in Barcelona, after travelling for 16 plus hours, we immediately went to the Picasso Museum. Because, you know, who needs sleep? The museum was awesome. My boyfriend and I are both big fans. Unfortunately, no photography is allowed. But me being me, I didn’t read the signs. I snapped this.

I was immediately tackled by security.

Not really. But I was VERY strongly warned. I’m pretty sure I heard the curator mumbling, “Stupid American” as he walked off.

After this we wandered the beautiful winding streets around the museum, full of enchanted alleyways, twists and turns. We were looking for something to eat. After looking at multiple menus we settled on a cute, tiny tapas place. That’s when it happened. I realized I was in love with Spain.

To be honest I didn’t really know what Spanish food entailed. I ignorantly thought it would be similar to Mexican. I now know that Spanish food is one of my favorites on the planet. At this first spot we ate veal sweetbreads, grilled octopus, and braised oxtail. Everything was out of this world. My only complaint was I didn’t have a bigger stomach. I wish I could show you a picture, but at that point we were trying to play it cool and not act like tourists.

That lasted for about 3 hours. Then we took this.

That night we wandered the Gothic Quarter and stumbled into the cutest market, La Boqueria. The picture above represents the best sangria and salmon tar tar I have EVER had.

Next we wandered through the streets until we hit Placa Reial, a beautiful square in La Rambla where we ate Lobster Paella and drank Rioja. A street performer put up a tight rope between two trees and entertained us. There was live music. I was in Heaven. Other highlights included getting lost trying to find a sangria grotto. But we found it! And the sangria was delicious as the grotto was cute. I mean, there was a fairy.

The next day we visited Park Guell designed by Gaudi. It is a unique park with leaning archways and gorgeous tiling.

Obviously, seeing that much beauty caused us to work up an appetite. So we went back to La Rambla to eat at Els Quatre Gats, which is famous because Picasso had his first art show here. The cafe was an artist hangout back in the day. I’m sure the owners loved all the broke guys taking up space, not ordering anything. But now, because of those slackers, they are always busy. This wasn’t the best food I had on the trip but still good. Most memorable was my desert of chocolate toast. 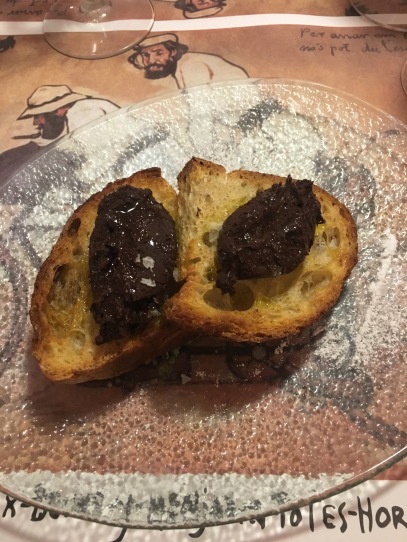 After, we explored Gaudi’s Casa Batillo, which was gorgeous and sea themed. This interior courtyard represents the water of the ocean. There were even augmented reality aspects in certain rooms that made it look like the fish in designs came to life and swam away.

I know you’d think at this point we couldn’t possibly eat more, but you’re wrong. (Hey, we did do a lot of walking.) We next went to the creme de la creme, Moments, a two Michelin star restaurant at the Mandarin Hotel. This was the most incredible meal I have ever had. It was a fourteen course tasting menu that was movie themed. They used both Spanish and American classics to inspire their dishes. Our amuse bouche was “Breakfast at Tiffany’s.” They brought out mini cheese bread puffs to dip in a yummy ham broth that was in to go coffee cups so it looked like we were having croissants and coffee just like Audrey Hepburn did in the movie! Other courses included Titanic (note the seaweed is shaped like the ship and it looks like it’s sinking into the seafood!): 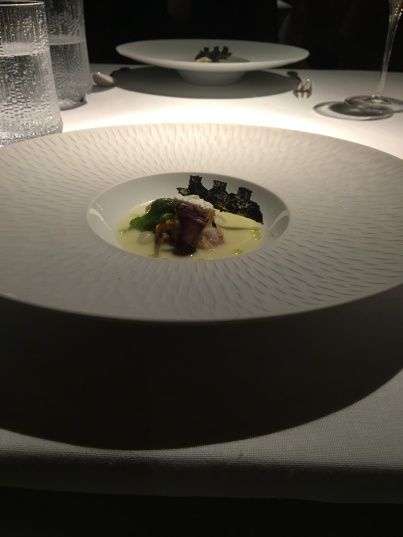 You guessed it. Silence of the Lambs! Isn’t this the best ever? Next one is from a Spanish movie, Mujeres Al Borde De Un Ataque De Nervious, where gazpacho was something the mother in the story always made.

And their version was vibrantly beautiful. I could go on forever. We had the $5 milkshake from Pulp Fiction, I even went under the sea with Finding Nemo! I mean, they gave me 3D glasses to wear at that point. Who doesn’t love that?

And with that, our too short stay in Barcelona came to an end.

I'm a comedic actress and writer who uses humor within my every day challenges to (hopefully) help you overcome yours. I'm into everything Zen without the side dish of precociousness. My aim is to make the path of enlightenment accessible and fun for everyone. View all posts by acomediansguidetoenlightenment

8 thoughts on “How I Ate My Way Through Spain: Part 1”